The legend of The Big White Wolf

In long forgotten times, around the Carpathian Mountains were today live Romanian, used to live the Dacians. The Dacians had an amazing connection with the Wolf, having it as a symbol on their flag. The Wolf flag was the one that ran ahead of the armies in times of war, installing fear in the heart of the enemies. The flag of the Dacians, the dragon with a wolf head, is a unique symbol in the world. The wolfs appear as symbols on many archeological discoveries all around the territory of today's Romania. The wolfs are considered to be the symbols of Dacian sanctuaries.

Some legends say that The Big White Wolf, considered the king of wolfs, fought next to the Dacians when their capital, Sarmisegetuza, fell to the Romans. The legends are many, from the god Apollo, to the Dacians to Christianity, the wolf seems to go from millennium to millennium as symbol of these lands.

In the old forests of the mountains, under the sky filled of stars,
In the warm breeze of the winds of freedom, the ones with a pure heart,
Can still hear today the Big White Wolf calling for the battles.
The Earth, the leaves, the sky know Him too well.
Can you hear it?
The sacred legends of the Free Dacians

The legend says that in long forgotten times, one of Zamolxis' priests was walking the lands of Dacia without ever stopping, to help the ones that needed it and telling the Geto-Dacians that the Big God was watching over them. Even though the priest was still young, his hair and beard were white as snow, and his faith, courage and power were known not only to people and Zamolxis, but to animals as well. The God, realizing his priest valor, asks him to live close to Him, in the mountains. Far away from people, the priest continued to preach as before, to the forest animals. In a short time, the animals of Dacia, started to listen to the priest and to consider him their master. The most he was loved by the wolfs, as they were the only ones without a leader, only hunger holding them in packs.

After a time, Zamolxis talks to his priest and decides the time has come for the priest to work for him in a new way, and transforms him in an animal. But not any animal, but in the feared and respected animal of Dacia, a White Wolf, big and powerful, ordering him to bring together all the wolfs of the forests to help defend the lands.  In this way, every time the Dacians were in danger, the wolfs came to help. It was enough to hear the calling of the Big White Wolf, and wherever they were, the wolfs would run to help the people that became their brothers.  The White Wolf, however, was judge, condemning the cowards and untrustworthy.

One day, the God, calls his priest to him, giving him the possibility to choose for the last and final time between being man or wolf. With extreme sadness in his heart, knowing what was to follow, the priest decides to stand by his God, hoping to help more the lands and people of Dacia.

Regardless of the faithfulness of most Geto-Dacians, wolves and the Big White Wolf,  the Romans manage to infiltrate whiting them and as the invasion was getting closer, they manage to put in the hearts of some cowards the mistrust of the Big God. This way, some Dacians are starting to fear that Zamolxis won't stand by them in battle and the cowards, lost in fear, start killing all the wolves in their path hoping that one of these will be the Big White Wolf, whose head they could offer the Romans in exchange for their lives. The wolves, as many as they were left, ran to the hearts of the mountains, never to come again in the middle of the brothers who betrayed them.

The Big White Wolf and Zamolxis go inside the Sacred Mountain from where they watch with tears in their hearts as the Geto-Dacians are defeated by the Romans because of their own betrayal.

The symbol of the Wolf as defender of these lands does not stop to the Geto-Dacians. In other later legends, Saint Andrew was sent to preach in the 'lands of the wolves' and was protected on his path towards the Dacian sanctuaries by the Big White Wolf.  Also, older yet, one of the versions in regards to the name of the Dacians, considers the word daoi- coming from one of the Thracian dialects, meaning wolf. This attribution is connected by some authors to the Dacians role as Defenders of the Sky and Earth.

Even today, around camp fires, if one stops and listens to the stories of mountain man, will surely hear recollections of some people being saved in moments of great danger by a ... White Wolf.

The mythical image of the White Wolf- the leader of the wolves, was highly respected by the ancestors, as the one that was the Dacian savior in the citadel of Sarmisegetuza assaulted by the Romans, and in general as the one that was always helping them in moments of danger. There is a surprising correlation between the legend of the Big White Wolf and the legend of the god Apollo. The god had his temple on the island Alba (White in English, Leuke in Greek), on the shores of the Black Sea (the actual Island of the Snakes). Every autumn, Apollo went back to spend the winter in the mysterious country of the Hyperboreans where Boreas is king. Apollo was the leader of this Hyperboreans and was called the Lycanthrope, meaning The Wolf, whose name remained in mythology as the Light Wolf. 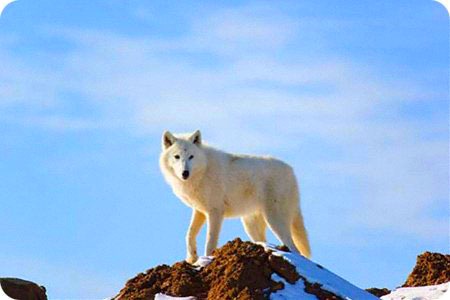 Alexandra
I am a Mother, a daughter, a sister, a friend, a lover... I am me... Witch and woman, young and old, magic and thought... I am Earth... Child of the Universe, I call the planet Mother and the sky Father... I am a woman lucky enough to have parents that made sure I had a culture, and remained a dreamer with an analytical mind.